Archery netting versus back stop matting?

forgive the newb quesiton, but I am not sure I understand the difference in use of netting (which seems to be really common) and matting which I dont think I have seen in use - though to be fair much or my archery has been indoor target

Its this stuff, comes in big lenghts just like netting . . . 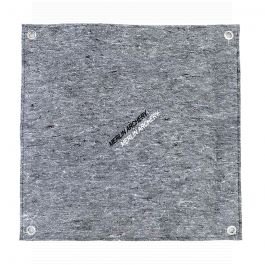 Premium backstop material for all occasions.

Staff member
Supporter
Fonz Awardee
Ironman
A net covers far wider than just your boss. So if you miss, the net catches it. The mat just sits behind your boss - it's a small bit of thick felt basically, and if you've shot a weak spot in your boss, stops pass-throughs. It's cheap, but not at all the same thing.
A

Supporter
This mat isn't just sold as target nappies, it comes in lengths of up to 20m (in single thickness)

So it can be used as a "target nappy" behind a boss as described by TT, but it can also be used as an alternative to a net for indoor shooting etc.

It looks like a thick heavy duty felt, and I'd not seen it until this winter, it's also quite bulky which is one reason our club still replaced our tatty old net with a new net and not some of this, but I was quite impressed with its arrow stopping abilities. It's not arrow-proof but it seems much better than any netting I've encountered.

I came across it on a Merlin visit where one of the staff demonstrated it by hanging one of the (double thickness) target nappies and shooting it with a compound from 2 or 3 meters - the arrow bounced off!

With our club indoor netting if I push one of my carbon ones or ACGs against the mesh I can force it between strands of the net without much effort (and the odd arrow pinched off the rest has gone straight through in the past), but I cant get the same arrow to penetrate the (single thickness) mat by hand.

We've got a piece of the mat at home for training, and test shooting carbon ones with 42# otf, the arrows penetrated the mat but stopped mid-shaft, before reaching the fletchings. The mat sort of stretches where it's been hit hard (and stays stretched), and I doubt it would handle repeated shots in the same place as well as the first, but I remain quite impressed.
It's not had to stop anything for real, the boss has been doing that , but I'm pretty confident that it would if required.

If I shot the same arrows at a normal net, the first thing I'd expect to slow the arrow would be the wall behind!

2114 X7s from my bow just bounce off, but I'd give a normal net a reasonable chance of stopping those anyway because of the diameter.

My wife shoots compound with about 35# peak, and the mat also stopped her ACCs mid shaft. I'm sure a more powerful compound or some of the very conical points would be a very different story though.
G

Supporter
I had a mishap with a carbon from my compound, It went through two quite separate nets one behind the other about 10 feet apart. The hole in the second net was not much lower down than the one in the first net. It was like they were not there. I am not sure what grade of netting they were; but it seems that doubling up has little effect unless the netting is pretty heavy duty in the first place.
S

Supporter
I once lost an X10 when it went straight through netting. Tiny hole. A year later the arrow was found 50yds further on. Also arrows goign through netting indoors is not rare - usually thin fast ones like ACEs.
G

Supporter
It is interesting how arrows will pass through netting. At the club where I shoot, there is a gun club. One group were a bit naughty and took pot shots at our nets. We knew because there were lead slugs stuck in them!! I would have expected them to have gone through.
4

geoffretired said:
It is interesting how arrows will pass through netting. At the club where I shoot, there is a gun club. One group were a bit naughty and took pot shots at our nets. We knew because there were lead slugs stuck in them!! I would have expected them to have gone through.
Click to expand...

Must have been airgun pellets not rimfire bullets. Pellets from sub legal limit airguns run out of steam very quickly so not that surprising. I went to an outdoor air pistol event at a club who shared ground with other sports including archery. They shared the netting backstops and had tested the netting successfully with air pistols.
G

Supporter
I 'm not well up with these things but the ones that were recognisable had a blunt front end with a bullet shape after that, the others were barely recognisable as they had deformed do much they looked as if they had melted a bit.
L

thanks folks, this is useful. I am pondering a mat behind our practice space at home and this product does seem better able to stop arrows from smacking in to the wall

my own experience of netting is I dont trust them. Using a 30lb recurve I personally put an arrow through a nearly new net in my youth. It was indoors and only escaped going outdoors because the wire reinforced window (remember those) many metres behind stopped the arrow at the fletchings
G

Supporter
Stripping arrows of their fletchings can be done with those special tools you can buy from archery shops.
Nets take off all three at once; the tools only work on one at a time... it's time they were redesigned to keep up with the competition.

LittleSkink said:
Its this stuff, comes in big lenghts just like netting . . .

Premium backstop material for all occasions.

That's a good point. I had not considered the matting as I thought it was small sizes only. The big downside is that it is around 1000g/m2. That's heavy. Compare that to heavy duty netting (ERA Club) that weighs around 450g/m2. Its soon adds up. But then double up the netting and hang loose, you end up around the same weight, and its around half the price of doubled up netting.
I don't know what the matting is like when it gets wet. If you do go for matting I would be very interested in your impressions.
I've lost count of the number of arrows I have seen go through netting over the years.
4

The 2m x 2m matting looks like a good backstop solution for a garden range too.
As above the question is what it’s like when wet. It’s not going to dry out quickly and could get pretty scummy in winter. A perfect medium for growing mould, moss and even small weeds
G

Supporter
Veg would be more useful.
4

geoffretired said:
Veg would be more useful.
Click to expand...

Well yes, but not easy to grow in felt. I'm guessing, I have no idea about growing stuff
G

I'm guessing, I have no idea about growing stuff
Click to expand...

That would be equally true if you had written, " I'm guessing you have no idea about growing stuff."

Supporter
Growing your own back stop device; is an earth bank the way to go?

Supporter
AIUK Saviour
Don't think the janny in the school gym would be too pleased.
G