I'm trying to develop a project revolving around VR archery with its main aim being a competition simulator.

I'm continuing it from a previous year where I simply tried to attach a stretchy band to a Vive controller as a means to simulate the feeling of a bow. In the end, turns out physics exists and given there was nowhere for the energy of the stretchy band to go, it made the simulator pretty much unusable as the handset would just torque wildly and send the virtual arrow anywhere.

We sort of 'fixed' the issue by strapping a brick to the front of the controller to increase the intertia, but then we found that the low poundage band I used meant the bow controller fell off your hand unless you held it which sometimes meant the trigger didn't depress.

Anyway, when redesigning it this year I had the idea of using a bow mounted shot trainerand attached to an actual bow. This had the advantages of being transferrable given the current Covid climate and would have helped with the immersion as the participants would have the bow they shoot in real competitions.

I've looked at things such as the Vibracheck safedraw and the KIS shot trainer but can't seem to find them anywhere or an equivalent current product. Fundamentally, I need to buy or design some system where some of the energy can be dampened or expelled.

If anyone has any ideas or possibly some bow-mounted shot trainer I could buy that would be massively appreciated. Ideally, the system is bow mounted but if I can jerry-rig some sort of stretchy band system that would work as well. 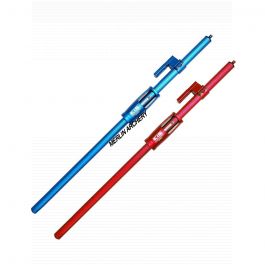 The KIS Archery Shooting Trainer is the solution for training space limitation.

The KIS Archery Shooting Trainer is the solution for training space limitation.

Fonz Awardee
Ironman
American Shoot
you could try looking at the skorten exerset from Targetcraft archery; Training Aid
but it looks like you'll have to contact them for availability.