Supporter
Inspired by a discussion on another thread, and having far too much time on my hands at the moment, and fuelled by liquid poor judgement, I have embarked on a totally pointless project:

This is an electrically powered induction coil arrow point removal tool. The arrow goes into the coil on the left and the arrow is heated by induction.

It will heat an arrow head to hot melt point removal temperature in about 30 seconds.

It has the following killer features over a gas flame:
The next step is to fit it into an ugly project box, increasing costs further.
A

Well, it seems to have poppped the nock out OK.

AJBrady said:
Well, it seems to have poppped the nock out OK.
Click to expand...

That was an old bent arrow. I didn't want to use a good one in case I turned it into slag.
G

Supporter
I think it is a good idea.... to keep those pliers on hand.
Actually... it sounds like a great idea if it only heats the metal on the inside.

Don't be too sure about burning the house down. Found a crack in one of the project arrows. Did a bit of an experiment and it doesn't take too long going from softening epoxy to melting aluminium with a red hot point.

Supporter
Melting aluminium could be useful if you could mend split shafts by melting them in the correct way.
Usually the nock end is split, so cut that part off and melt it. While molten pour it into a suitable shaft that had would be a tight fit around the shaft being mended. While still soft, press in a special nock the same size as needed for the shaft being mended. This nock would need to be the same dimensions as the appropriate plastic one but made from a material with a higher melting point than aluminium. Care must be taken when pressing in the " nock " in order that it stays central within the molten aluminium. ( You can work that out I'm sure) Finally, join the repaired end piece onto the shaft. That part sounds easy but is full of hidden dangers. One way is to fit a suitable rod part way into the shaft and slide the mended piece down the protruding end of the rod until shaft and mended end are in perfect alignment with each other. If the two surfaces are perfect with no gaps, the metals will join themsleves together by molecular attractions. 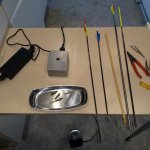 It's now in a nice fire and explosion containing aluminium box with a remote foot switch for easy operation.

You can see the arrows that that I've removed points from on the table, and the points on the little tray. There's a Platinum Plus with NIBB, an FMJ with insert, a wooden arrow with taper point, a Cartel AC with an insert point and a mystery carbon with an outsert point. The Platinum Plus was hot melt, the FMJ was cool hot melt, and I have no idea what the others were glued with.

The points were all removed without drama; the only issue was estimating how long to zap the arrows for. The size of the point, and in particular the point material seems to cause a huge variation in time to heat up.

So it seems to work, but at about 50 times the price of an alcohol burner (plus time) it's totally not worth it

Ironman
o7 ... I salute your idiocy. it needed done no matter how stupid.

Are you sure it doesn't impart the pints with special magical magnetic properties that cures target panic? Or maybe initiate time travel?
Del
4

Del the Cat said:
Are you sure it doesn't impart the pints with special magical magnetic properties that cures target panic? Or maybe initiate time travel?
Del
Click to expand...

Nooo, it aligns the lines of flux in the magnetised points with the Earth’s own magnetic field for maximum accuracy.
Obviously.

dvd8n said:
So it seems to work, but at about 50 times the price of an alcohol burner (plus time) it's totally not worth it

It's just like the latest Winoyt riser that's actually 5 years old but now has a new paint job.

My target market is the super rich archers who have totally run out of other things to spend their money on, but who nonetheless want to salvage points from their old arrows.

Supporter
Or make it look nice and triple the price
L

Supporter
why dont you tweak it to shoot the arrows without a bow instead? Same principles at work

Supporter
After using this thing in earnest I have a couple more pluses and minuses:

+ you can get components off arrows without causing any damage to cresting etc.
- you can't use metal tools to grip loose components while heating them up

I had to use ceramic tweezers to hold the piles while heating them and it was a massive pain; the jaws are just too hard for a good grip. The stupid things were pinging all over the place resulting in piles with a layer of fluff firmly glued to them. I'll not be buying an island in the Caribbean any time soon.

You could always use a wooden clothes peg, non spring type, or something similar or non-magnetic.

snowman said:
You could always use a wooden clothes peg, non spring type, or something similar or non-magnetic.
Click to expand...

I had a think about this, and it sounded like a really good idea. But all the clothes pegs that we had were spring type, and plastic. Never mind, it got my brain going, thinking about alternatives.

I decided that a piece of bamboo with the hole down the middle drilled out to the correct diameter to accept a point, might do the trick. It took a few goes to get it right as I was winging the sizing a bit and bamboo seems predisposed to split when you work it, but eventually I had this:

A slight split to the bamboo gives a bit of springiness and leeway for the point size. The point is held quite firmly. The black section is silicone tubing that adds to the springiness and stops the split spreading too far.

After trying it out a couple of times I added the stick down the middle for ejecting hot points:

I've not used it much so I don't know if it will be prone to catching fire or if it will clog with glue. I thought of waxing it which would help with the glue issue but wouldn't do much for the bursting into flames thing.

It'd be easy to replace as it was quick and easy to make, so maybe it's a consumable, but the wife's shed and garden seems to be running out of bamboo now for some reason.

Or I could make one out of teflon tube which would solve all the issues but would go against my aim of spending any more money on this stupid project.
Last edited: Nov 14, 2020

I never tried using the induction hob as a means of heating for inserting points but thinking about your efforts and concerns I did try the following with some success. I used a hot glue gun to apply some glue along the point shafts and let it set. I then heated point over the hob till glue re-melted then inserted the point into the arrow shaft and held in place till set. I know it's a bit of a roundabout way to inserting points but got to find something to do in lockdown. Not had any points come out yet in garage shooting. Using the glue as a heat indicator obviously prevents overheating. In an earlier experiment I did find you can actually melt an aluminium arrow by overheating a point but you can't melt it directly. Same theory why you can't use aluminium pans.
You must log in or register to reply here.
Share:
Facebook Twitter Reddit Pinterest Tumblr WhatsApp Email Link
Top