eljetico said:
Changing distance/target halfway through - I'm guessing you wouldn't be shooting a 'formal' round so would using the Practice mode make sense here I wonder? Shoot an arbitrary number of shots at 90m with arrow set A, for example, save the scoresheet and start a new one at 70m with arrow set B....

Sorry, missread your last point about changing arrows between ends...I understand what you mean. Arrow set is currently assigned to the entire shoot but it wouldn't be difficult to allow a change of arrow set at any point. To do so, you would shoot a few ends (or whatever) with arrow set A, go into the Arrows page and update the arrow set to B, then continue shooting...easy enough on the mobile app but I'll think about how best to represent that in the shoot details views.

Just a reminder that the invite period for beta testing XRingScoring ends on 17th Feb (Sunday). After that, no more invitations will be issued. Just visit http://xringscoring.com and submit your email address.

As an incentive for you to sign up, I will be releasing this new 'experimental' feature on the mobile app in the next day or so - basically a simple graphic depicting groups for all shots at the current distance, with elevation/windage variation expressed in appropriate target units (ie, centimetres for FITA faces, inches for Worcester...). Similar to the group information on the main site, this shows maximum group spread (outer thin red circle) and mean grouping (inner thick red circle).

A couple of updates to mention while the beta period continues:

First, here's the screenshot for the in-shoot group information on the mobile app (making available for AIUK non-members):

The vertical/horizontal variance units are in centimeters for all target faces, and the thicker purple circle denotes the mean shot distribution.

I just released an update to the mobile app which should improve shot plotting performance on all devices, but especially Android phones and tablets. (The challenge is overcoming the lag between touchevents (ie, moving your finger over the target face) and updating the position of the crosshairs and ring colours. This is very smooth and fast on Apple devices, partly because of hardware graphics acceleration, but not ideal for other machines - I'm continuing to work on getting things as equal as possible in code).

Thx for the update.
Keep up the good work Tim. Best scoring app I've come across bar none!

I have another performance improvement update going out tonight!

Some people have been asking about how to update their mobile with the latest version - I'm happy to report that all you have to do is re-open the app once or twice to receive the latest update. Your mobile browser will contact the server to see if anything has changed and if so, download the updates automatically.

I need a bit of help not being a computer person. I have the beta version on my iPhone and its brilliant but a bit small for me to work with. I have tried to get it on my iPad but when I log in the software works fine except the mobile app.

I get an open and filled rectangle with a rear facing green arrow. No target face etc.

What am I doing wrong.

Supporter
Hi Vara17, the graphic you're seeing likely means you're viewing the mobile app in landscape mode - if you orient your ipad in portrait mode it should appear as normal.

WRT to your iphone, did you bookmark the app to your homescreen? When you open the app from the homescreen, it uses the full height and width available, which may be more convenient.

If you're still having trouble, send me a mail at [email protected] and I'll do my best to help.

DOH. Told you I am not a computer person. I turned the iPad round and it works great. Great size and much easier to plot. I now look forward to logging some shoots.

Thanks again for all your efforts. I would happily pay for the product.

Supporter
Thats good news, Vara17: glad you got it working!

If anyone would like a demo of xringscoring, I will be shooting at the following tournaments in the next few weeks:

I will be in Rayleigh Town AC colours (red shirt, black sleeves): it'd be great to meet you and give you a tour of the application.

Hi - I've had a play with this "app". Very Interesting. My comments and desires:-

Mobile app:-
Would like to designate more arrows for practice - at least a dozen maybe more
Confused about choosing each arrow number as they are pulled from the boss
Confused about when arrow number is blank, red or green. What does it mean?
Confused about correcting a mistake in scoring an arrow
Would like ability to plot bare shafts as separate group and show both fletched and BS groups on same chart
Would like ability to record differing sets of arrows and different bows
Would like to be able to score on GNAS field faces for practice and maybe marked competition rounds. I guess range would be problematic with unmarked ranges.

On-Line app:-
What is meant by "% precision" and "% accuracy"?
Why choose "mode" as a statistic?
In this plot below, Does the outer red circle really give an indication of the group size? I think I would have drawn a slightly smaller circle displaced slightly to left 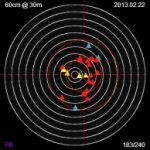 Can the app show me where individual arrows stats and where they are scoring for arrow tuning purposes
Can the app tell me what my score would have been had I shot that group, but straight this time! Useful for A-B testing of components.
Show group displacement from centre a la mobile app
Would like to be able to use score at one distance to predict score at another

All in all a nice interface and already quite useful. It could be taken to a whole new level with new features.

Thanks for using the application and for your feedback - I'll try to address the items you mention:

Would like to designate more arrows for practice - at least a dozen maybe more
Click to expand...

This was raised earlier and I'm still mulling over how to handle, if at all - and I'm not too clear on the purpose (apart from hefty arrow tuning...). Can you enlighten me some more on the 'job being done'?

Confused about choosing each arrow number as they are pulled from the boss
Click to expand...

Confused about correcting a mistake in scoring an arrow
Click to expand...

Under the Arrows view, you can identify the (max 6) arrows you'll be shooting - using numbers only at the moment. These are then shown under the scoring face in the plotting view. As you score your arrows at the target, plot the position and then tap the respective numbered button to 'assign' that arrow. The next plot defaults to the first arrow - repeat until you get all identified arrows assigned.

Confused about when arrow number is blank, red or green. What does it mean?
Click to expand...

When you start scoring, all arrow numbers/buttons are blank. When you plot your arrows, the last arrow assigned is red (this simply identifies it as the last shot). To 'undo' the shot - if you want to replot the arrow - tap the red button and it goes away, ready to be repositioned. Green arrow buttons simply show previously plotted arrows. As above, you can assign the last shot arrow (in red) to a blank button.

Here's a quick video showing how this works -

Would like ability to plot bare shafts as separate group and show both fletched and BS groups on same chart
Would like to be able to score on GNAS field faces for practice and maybe marked competition rounds. I guess range would be problematic with unmarked ranges.
Click to expand...

These will be future considerations as they are outside the simple scoring mechanisms in place at the moment.

This is in the works! But you can assign an arrow set to a shoot on the mobile at the moment, and update the bow used on the 'desktop' app.

Accuracy as used in xringscoring is a measure of how close the overall group center is positioned from target center. 100% accuracy would be all shots at dead center.

Precision is a measure of how close to the group center all shots are. 100% means all shots are grouped very tightly - on top of each other.

Why choose "mode" as a statistic?
Click to expand...

Mode is simply the arrow score you shot most! I find it helpful to see, from a given shoot, that most shots went into the 9 for example Equally, seeing that my average shot scored a 7.4 for that shoot is also handy. There is also the score distribution chart on the desktop version to see the details. I am planning more interesting 'histograms' for shot statistics.

In this plot below, Does the outer red circle really give an indication of the group size? I think I would have drawn a slightly smaller circle displaced slightly to left
Click to expand...

The outer/thin red circle is the maximum radius of all shots from the group center but is not a measure of the group size per se (which would be positioned more as you describe).

Can the app show me where individual arrows stats and where they are scoring for arrow tuning purposes
Can the app tell me what my score would have been had I shot that group, but straight this time! Useful for A-B testing of components.
Click to expand...

Again these items go under arrow tuning for which the mobile app is not set up. I won't rule these things out, though!

Phew - hope I addressed the majority of issues, Big! I hope you'll bear with me while I continue developing the application - there will be more 'advanced' features coming.

Thanks again
Tim
A

Thanks for your detailed reply. The hints on using the interface really helped. Very clear now and I understand the choices you have made.


The reason I would like more than 6 arrows is that I often, if not usually, shoot more than 6 per end when practising. Often up to 10 depending on the number of bare shafts and crocked arrows I have at any one time! I would also, on occasion, with a new set of arrows wish to weed out potential fliers from a bunch of bare shafts....

I just wanted to thank Tim for the level of commitment and attention to detail he is investing in this project.
Truly impressive! Keep up the good work fella!

WRT shooting more than 6 arrows per end, and using an arbitrary 'set' of arrow identifiers - this seems to be the most requested update so far. I think I have a solution which would fit the UI quite nicely. Stay tuned!

As always, to pick up the latest updates, all you have to do is refresh your app a couple of times. If you have it pinned to your homescreen on Apple devices, just open and close a few times.

Supporter
I've had word that a number of potential test pilots haven't received invitations, so I've resent them to users who have yet to register. If they don't appear in your inbox, please check your Junk or (otherwise quarantined) mailboxes - they may have been filtered there.

If you still don't get the invite you were expecting, please let me know via PM.

Supporter
The updates keep coming: just released an additional feature for the mobile app which allows users to offset the crosshairs when plotting shots to improve visibility and accuracy.

As before, details are available on the Facebook page or on the xring blog.
B