Show us your Recurve Setup

My First Set Up -

Hi, what are the advantages of changing the tiller bolts? Less wear on limbs? Noise improvement? I've noticed my limbs with the standard SF ones have a round imprint where the tiller bolt contacts them... Are these the bolts you use? Custom I.D. | Hoyt.com

jonUK76 said:
Hi, what are the advantages of changing the tiller bolts? Less wear on limbs? Noise improvement?
Click to expand...

jonUK76 said:
Are these the bolts you use? Custom I.D. | Hoyt.com
Click to expand...

Off topic but... Both of my GMXes are with the original one piece bolts. The floating heads did not play nice with Uukha VX1000. On the other bow, with Gran Prix 720 limbs, I had a hard time making the heads flush with the limbs when stringing (I hurt my lower back twice because of that). In both cases the bolts are set to the (near) minimum poundage. And in both cases I saw no difference noisewise. 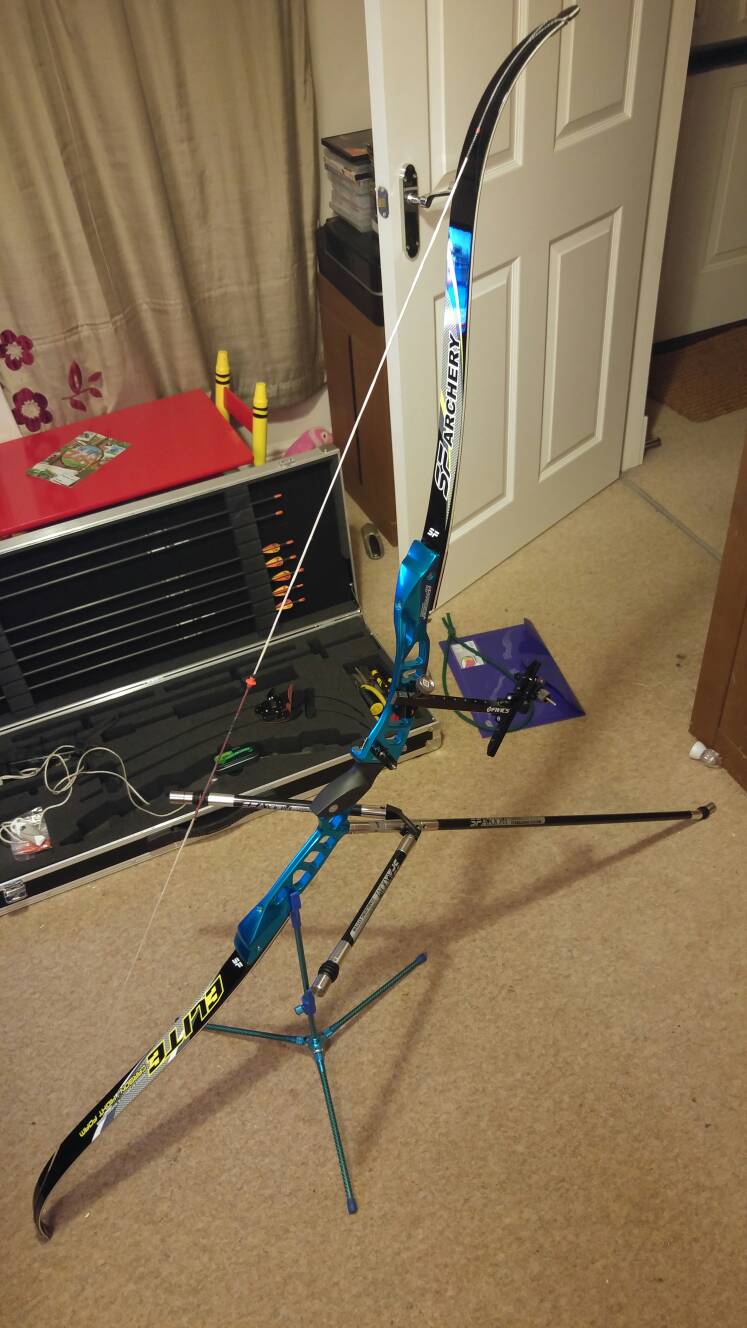 Supporter
AIUK Saviour
I feel like this one should be resurrected - I love looking at what other people have got...
My present set-up:
Core Air recurve riser 25" - blue
WNS Premium Alpha recurve limbs, 26# 68" - black with silver and orange lettering
Shibuya Ultima arrow rest - blue
Shibuya DX button - blue
Avalon Tec X Olympic recurve sight - black with orange accents
Infitec Carbon long & short rods - black
ACC arrows - matt black with sunset gold cock vanes, and pink hen vanes, and orange nocks
Avalon V-bar - black
ancient red quiver (I got it 20 years ago from Quicks, and am only just about to retire it), pink accessory pouch, pink lycra chestguard, orange Bohning armguard
Obviously, I'm a bit mismatched in terms of colour, which is of course the really important thing, so over the next couple of weeks, I'm having the riser hydro-dipped to be candy pink with orange sparkles (exciting!). I really like my riser, and it's getting a little bit battered, so that works for me.
There's a new pink Shibuya arrow rest and button on order, as well as a pink quiver.
So my new, much more co-ordinated colour scheme will be pink where possible, with orange when not, with a few bits of black for the things that really don't come in any other colour. Not a colour combo I see much on the line, so it'll certainly stand out.
Oh, and I'm considering some variety of pink limb skins too (on the outer face only, mind). I'll post a picture when done.
What's your kit like?

Supporter
OK, I'll play - even though most of it is on my diary thread anyway - Plus I've just been FB'd that shooting is off tonight due to both weather & field state 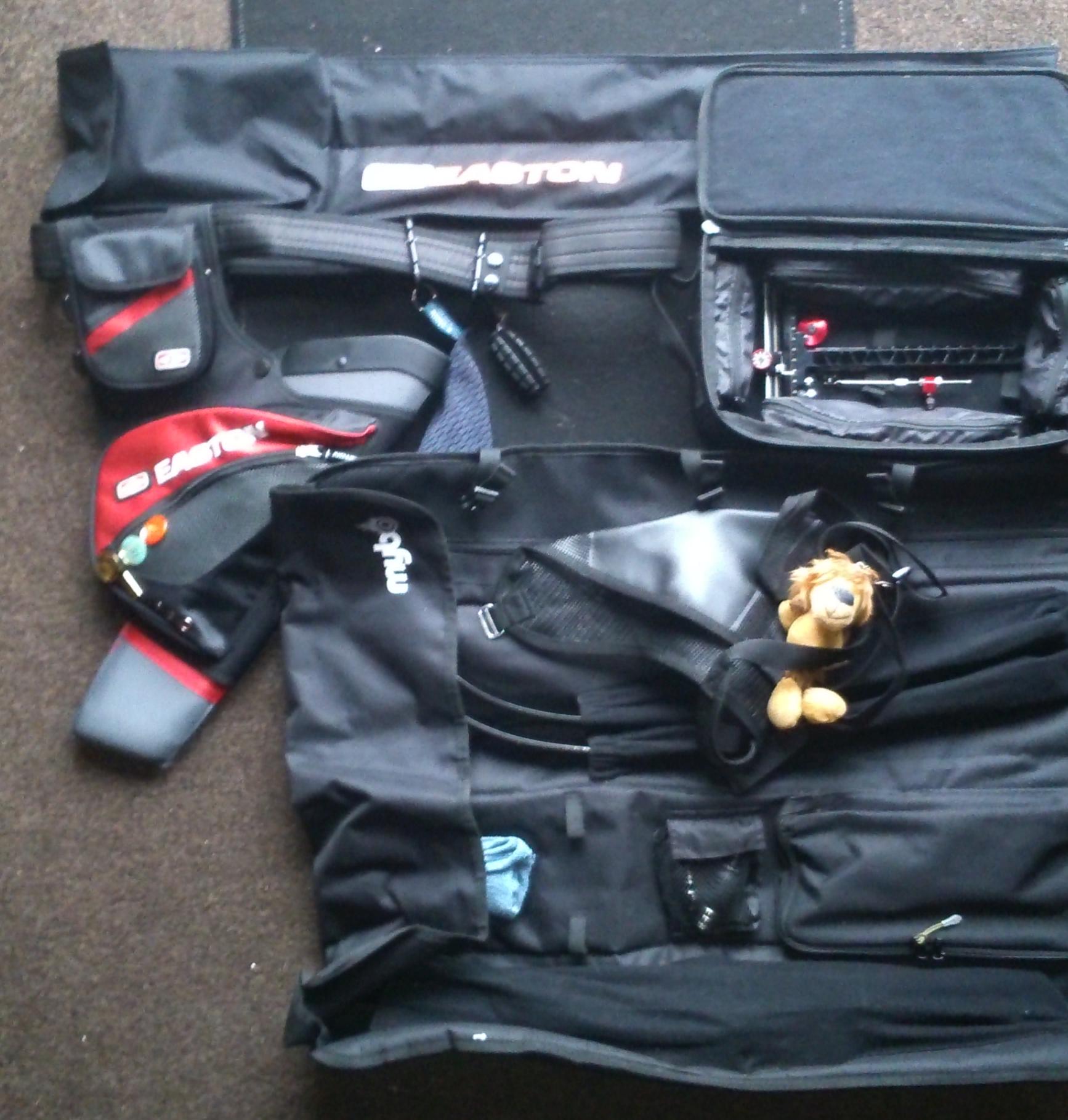 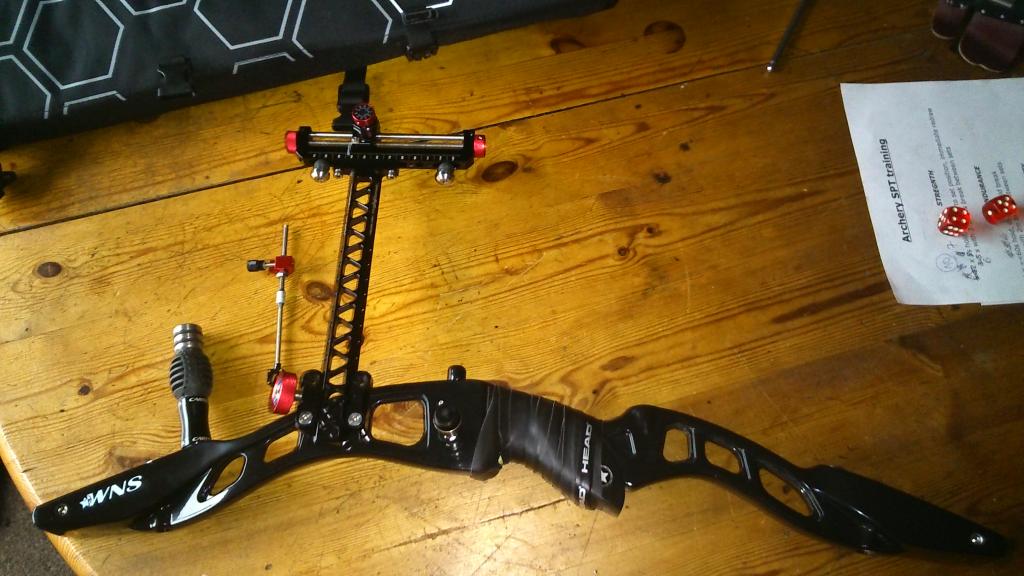 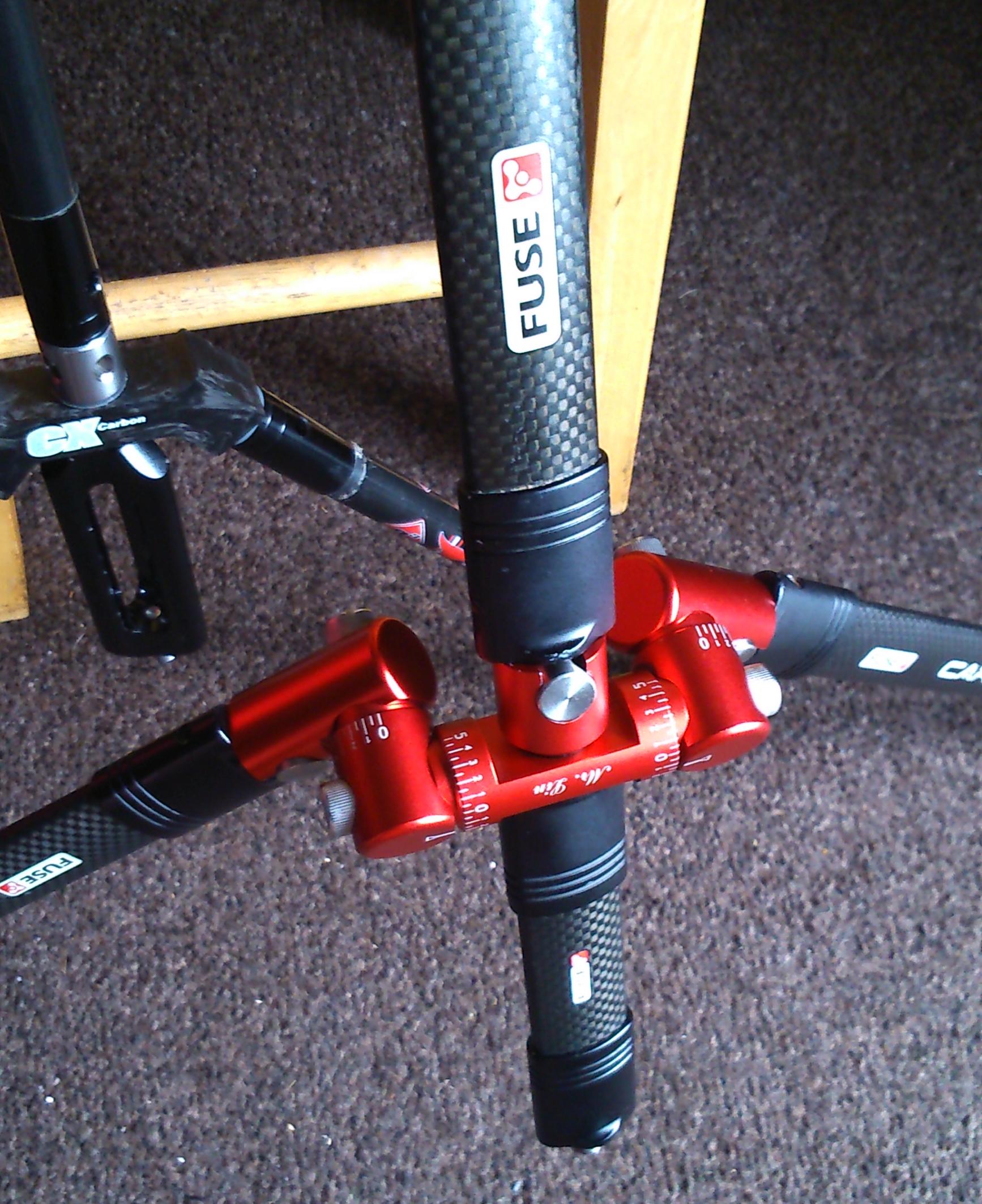 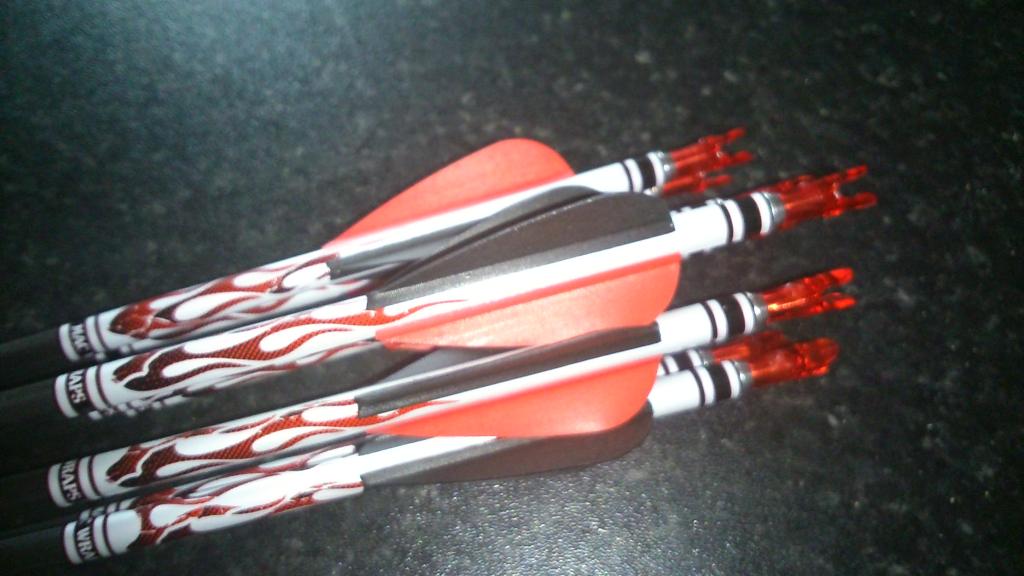 MISC Modified Decut Rugbii Tab, on its' 2nd facing now. Fivics Rainbow armguard (Purple as they were o/s in black ). Very unsatisfactory bowstand ('magnetic' legs which fall out too easily & a string-holder which randomly rotates around the shaft). Scope & 'Pod from eBay, no complaints so far.

So my 'thang' is 90% Black, with some red & white permitted. I dress in black w/white trim too! (Sod club colours, they just ain't me! Anyway they only order about once every 4 years.) (...AND.. the club I'd like to transfer to, their colours are black with white trim anyway )

- It does restrict the choice of limbs though, when at the very least they have to be black on both faces.

The first colour for my first ever arrows. I had visions of this blazing contrast of black and sunset gold standing proud in the X ring.... sigh. Turned out to be a nice burnt orange but it couldn't live up to the image in my mind. Now I'm more cynical.

I use black, red and green for recurve and black, neon orange and neon red for compound. Should have been more cynical about the neon red too....

Mind you, black cherry serving material was everything I hoped.
E